we will call you soon

Kosamattam finance understands that when we invest in a renewable energy solution, we make a commitment for decades. That is why we look at ourselves not just as harvesting wind energy, but standing by a commitment to do our part for the environment. Kosamattam Finance has established wind farms at Ramakel medu of Idukki district in Kerala.

Environmental sustainability continues to be an issue of critical importance to us and those we serve. We recognize our responsibility to take action to reduce our environmental footprint, while having an opportunity to use our business resources to enable our clients, customers and employees to reduce their own environmental impacts.

With the success of the existing wind mill energy fields, Kosamattam finance is studying the scope of doubling its wind power generation capacity and take it to the next level. 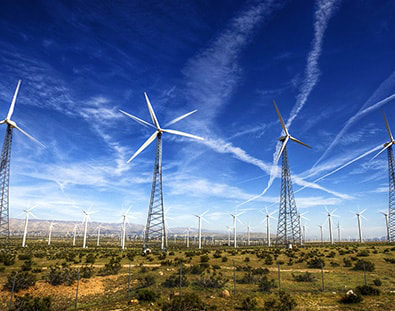 The Wind power programme in India was initiated towards the end of the Sixth Plan, in 1983-84. A market-oriented strategy was adopted from inception, which has led to the successful commercial development of the technology.A notable feature of the Indian programme has been the interest among private investors/developers in setting up of commercial wind power projects. The wind power generation capacity in India is 49,130 MW as per the official estimates in the Indian Wind Atlas (2010) by the Centre for Wind Energy Technology (C-WET).

Wind in India are influenced by the strong south-west summer monsoon, which starts in May-June, when cool, humid air moves towards the land and the weaker north-east winter monsoon, which starts in October, when cool, dry air moves towards the ocean. During the period march to August, the winds are uniformly strong over the whole Indian Peninsula, except the eastern peninsular coast. Wind speeds during the period November to march are relatively weak, though higher winds are available during a part of the period on the Tamil Nadu coastline.

I. Register on SCORES portal

b. Speedy redressal of the grievances